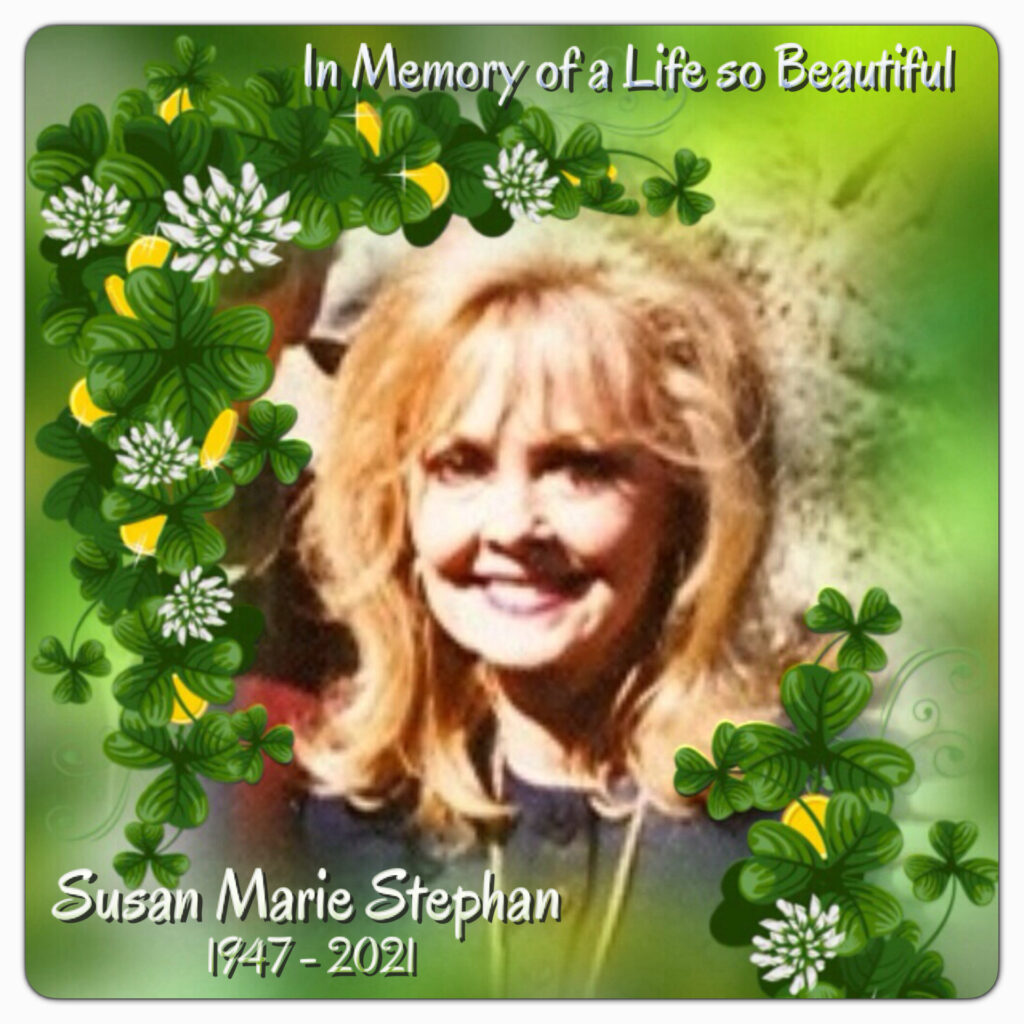 On October 2, 2021 in Las Vegas, Nevada, Susan Marie Stephan passed on to heaven to be with her parents.

Susan was born in Chicago in 1947. Susan is survived by her husband Martin Stephan, her lovely daughter Nicole Marie (Lubick) Rosa and her husband Michael Rosa, and four beloved grandchildren who were inspirations in her life, Michael Rosa Jr, Thomas Rosa, Anna Rosa and Anthony Rosa, who all lived and were raised in Las Vegas, Nevada. Other surviving relatives include her sister-in-law Sharon Lubick Walsh from Tucson, AZ.

Susan was born on January 11, 1947 in the Hyde Park area of Chicago near the shores of Lake Michigan and attended elementary school and two years of High School.
In 1960 Susan and her parents moved to Edina, Minnesota near Minneapolis to be closer to her father Melvin Carlson’s work as a plant supervisor for General Mills. There she attended and graduated High School and ultimately enrolled at the University of Minnesota and received a Bachelor of Arts degree in Art, Education and Journalism.

In 1969 Susan began work at Sun Newspapers in Minneapolis doing interviews and articles with such notable celebrities as actor Omar Sharif and reporter Irv Kupcinet.

In 1971 Susan was given the opportunity to interview with United Airlines as a Flight Attendant. She quickly accepted the position as United Airlines was based at O’Hara Field in exciting Chicago where she was originally born and Chicago was also slightly warmer than the Minneapolis freezing winters. While flying with United she met her first husband Ronald Lubick and they later married and gave birth to daughter, Nicole Marie in 1974.

In the 1980’s while living in Hinsdale and Naperville, Illinois, Susan held various employment positions in the fashion industry with Este Lauder, Neiman Marcus and Saks Fifth Avenue.

In 1996 Susan met the love of her life and married her soulmate Marty Stephan on Valentine’s Day at the wedding chapel in the Treasure Island Hotel and Casino. A marriage that lasted over 25 years to this date.

During 2000 Susan’s compassion and caring for the less fortunate was spent with charitable organizations at our Church while sheltering the less fortunate and needy on weekly overnight stays. When not volunteering at the church, Susan became a “Diamond in the Rough” by working in the jewelry industry that she loved immensely at “Ovals and Gems” at Caesar Forum Shops and “Tower of Jewels” at Bally’s Casino & Hotel on the Las Vegas Strip.

A memorial service for Susan will be held at the Southern Nevada Veterans Memorial Cemetery, Boulder City, NV. Her husband, Captain Martin Stephan (United States Air Force) will join her later for a life of eternity together.